The Nigerian Stocks market rebound to close the week in green after five straight red sessions, buoyed by gains in Dangote Cement and Bank dominated gainers’ table, led by FCMB.

With 22 stocks ending in green against 15 which ended in red, brought the market breadth to a positive round off 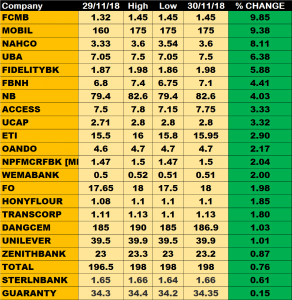 FCMB with 9.85% growth tops the percentage gainers’ chart, closing at N1.45 above N1.32 it closed on Thursday. 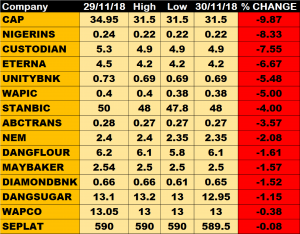 CAP PLC tops the losers’ chart losing 9.87% of its share price to close the day at N31.50 against N34.95 recorded in the previous trading session.

This is followed by Niger Insurance, Custodian and Eternal Oil all shedding 8.33%, 7.55% and 6.67% respectively

Diamond Bank traded the highest volume of about 121million units of its shares in 205 deals, valued at about N78million.

Zenith Bank traded about 20million units of its shares in 187 deals, worth at about N463million.