The Market Capitalisation of the Nigerian Stock Exchange on Friday hits N13.136 trillion as bullish sentiment persists bringing the All Share Index to close higher by 1.80%, settling at 25,204.75 points from the previous close of 24,758.39 points on Thursday. The market gained for 5 consecutive days this week bringing about a cumulative growth of 5.46%.

Investors gain N233 billion as market capitalisation appreciated by 1.81% to close at N13.136 trillion from the previous close of N12.903 trillion. 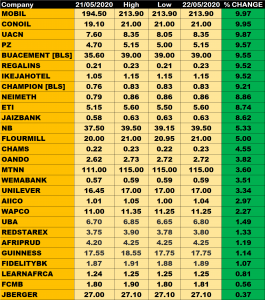 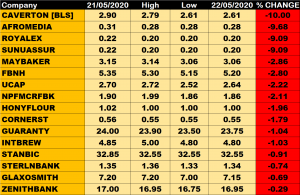 Caverton Offshore Support Group led other price decliners, shedding 10% of its share price to close at N2.61 from the previous close of N2.90. The firm on Friday proposed 20 kobo dividend to shareholders in its published audited year end results for 2019.

Royal Exchange and Sunu Assurance among other price decliners both shed 9.09% of their share prices respectively.