Though high caps stocks were not completely left out in the gyration, they however largely under-performed a number of low cap stocks with records of unprecedented price jumps in the week ended January 12, 2018. A cursory analysis of emanating market data for the week revealed that aside Conoil, the best twenty equities in percentage gains in the week under review goes for below Ten Naira in value. The gains were so mouth watery to the extent of sending panic among a cross section of investors as to whether such performances were sustainable hence, a rush for profit taking leading to a slow down Friday.

The fears were not unfounded as notable equities with stagnant prices significantly enjoyed patronages, not only in price but also in commensurate deals, volume and value. These include Unity bank with 32.26% Week on week price growth, Wema with 31. 67% gain in just one week, Jaiz Bank with 19.44% gain, NPF Micro Finance Bank with 16.79% gain and Linkage Assurance plc with 15.38%. The least amount invested on these naturally silent stocks on the floor of the Nigerian Stock Exchange was in Linkage where the sum of N6.202 million was invested. N138.749million was invested in the stock of Skye Bank while Wema attracted the sum of N1.318billion investment in the week under review.

Looking back, until this year, the last time the stock of Skye Bank recorded a growth was October 23, 2017 when the stock price grew by 2.0% to close at 51 kobo. Unity bank stock price last recorded consistent price gains in June 2017. 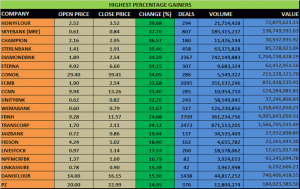 To close the week, Honeywell Flour led all with a price growth of 39.68%. The stock is however currently dwelling at overbought level and might shed some weight this week. More so, except if the company’s Q3 earnings come in with huge growth, its Q2 earnings of 28 kobo seems week for current price of N3.52.

Skye Bank was next in price percentage gain with 37.70% appreciation for the week, funning enough, the bank currently has not real earnings to lay hold on as basis of investment considerations added to the fact that it is also under the management of the Central Bank. What a risk as the sum of N138million went into the stock in the week under review.

On the flip side, there were only seven stocks on the percentage losers’ table. Surprisingly, the list include stocks like Dangote Sugar, Nestle and flour Mills though the percentage losses were rather insignificant for the week.

Dangote Sugar is actually currently trending down and might be attractive after a few days of downward price adjustment. Nestle is in a class of its own and will largely oscillate within same price level, being supported by low outstanding shares in issue and shareholding structure.

Zenith has never been a yoyo stock wit indiscriminate price performance. Deals, volume and value of trade with moderate price appreciation place the bank stock as the most outstanding in the week under review.

In deals, the 2,858 recorded for the week places the stock as the second best while the 301.507 million units of the bank stock that exchanged hands within the week was the sixth highest volume in the week. In all, a total of N9.740billion was invested in the bank stock to emerge as the second highest in turnover for the week. Despite these, there was a mild growth of 12.04% in the price as it closed at N31.26 from the previous week’s closing figure of N27.90. 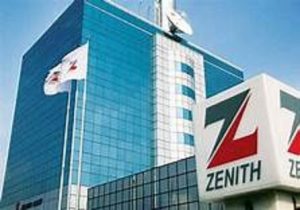 Significantly, Zenith’ stock price rose consistently between Monday and Thursday of last week before a decline on Friday.

Relative to earnings and in comparison with general industry performance, Zenith is currently underpriced at a price of N31.26.

The All share Index of the Nigerian Stock Exchange grew by 10.21% in the week ended January 12, 2018. Year-to-date performance is 12.17%.With 13.57%, NSE Premium index led all others with NSE ASem index under-performing the rest.

The Rights Issue of Flour Mills of Nigeria Plc of 1,476,142,418 ordinary shares of 50 Kobo each at the offer price of N27.00 per share on the basis of nine (9) new ordinary shares for every sixteen (16) ordinary shares held as at 8 December 2017 will be opened for subscription as shown below:

Trading in the shares of 7- Up Bottling Company Plc has been placed on Full suspension on The Nigerian Stock Exchange (“The Exchange”) with effect from the 12th of January 2018. The suspension is for the purpose of determining the shareholders who will qualify to receive the Scheme consideration following the decision of the company’s majority shareholder, Affelka S.A (“Affelka”), to acquire all outstanding and issued shares of 7-Up Bottling Company Plc that are not currently owned by Affelka. The company’s shareholders passed a resolution to this effect at the Court Ordered Meeting of the company held on Thursday, 11 January 2018. The Scheme will result in the voluntarily delisting of 7- Up Bottling Company Plc from the Daily Official List of The Exchange.