Either for the short, medium or long term, it is almost impossible investing in the Nigerian bourse without a consideration for bank stocks. For that is where the required volumes for high level trades are readily available, just pick and hold the leaders among them and you are bound to hit big profit if only you can wait and to the laggards, strategic shuttling can most times be profitable depending on market swings.

It suffices to state that the industry is the most regulated in Nigeria. To that effect, in as much as depositors’ funds remain the primary aim of the high level regulation, the multiplier effect would rub off shareholders’ funds as such will also in the long run become protected. At that, investments in bank stocks can be best described as sensible risk taking.

Notably, leading organisations in the industry pay interim dividend. In other words, there is always something to look forward to in bank stocks at intervals unlike in other industries where investors only look forward to the annual reports. This remains a high point, investing in bank stocks.
Echoes from past stiff regulations of Nigerian banks portray Nigerian bank managers as not only bold but dogged such that no matter the severity of the operating environment, they will always find their ways to survive well and when the operating environment becomes favourable, they declare super normal profits and subsequently, above average dividends to their investors. Price performances had always been enough proves. To be specific, running away from bank stocks all because of seeming negative pronouncement by the apex bank had often proven to be wrong strategy as the banks do always bounce back better and more formidable within a couple of months after such introductions.

Treasury single account policy of the Federal government and the introduction of BVN by the apex bank all have aided banking activities in the last couple of years. Going forward, these can only get better as implementation becomes more effective. To a large extent, funds outside of the banking system will gradually wane as banks’ turnover increase over time.

Central Bank’ policies on foreign exchange management were largely favourable to the banks, besides, most of them raked in lots of profits by deploying technology. Today in Nigeria, banking transactions happen all within seconds unlike in days of yore when such transactions do take long hours to complete. Nigerians will readily part with a token as incentives to the banks than to travel long distance to queue in baking halls.  As expected, less staff will be needed as technology gets better. Consequently, staff layoffs and reduction became imminent as the banks focussed on retail and consumer banking and in the process, saving cost. In effect, a measure of profitability was achieved in the year going by the statement of accounts presented to the market.

As we speak, with Q4 2017 results being awaited, it suffices to state that the build up in the quarterly reports were encouraging hence, audited reports being awaited promise good tidings. The caveat in a few however remains outstanding as funds belonging to the nation’s leading oil company is still hanging. 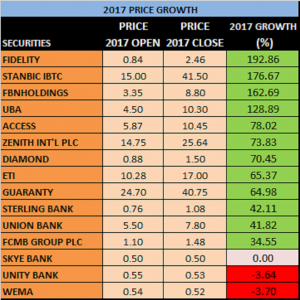 HOW PROFITABLE ARE BANK STOCKS IN 2018?

Going by the outstanding price performances in 2017, will bank stocks remain profitable in 2018 as they were in 2017? The simple answer is a straight YES. Price to Earnings Ratio of most of the banks are still largely low thus suggesting some more price distance to be covered. 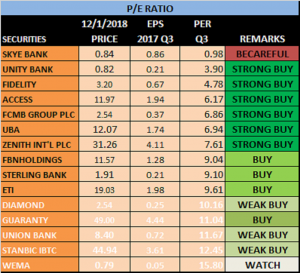 2017 was a year when the stock price of Guaranty Trust Bank Plc broke its 2008 highest price level. The stock price yet did not remain stagnant but forged ahead to create a new all time high. 2018 might just be the turn of others like Zenith and to those that might not necessarily break the 2008 highest prices, 2018 seems a good year to consolidate and bridge the gap between the 2008 and current prices.

INEC’ election timetable as recently released has it that general elections have been slated for March 2019. That presupposes that candidates to contest elections will emerge in 2018 when campaigns also are meant to commence after party conventions. Money flow within 2018 is bound to be lot better as Federal and State Governments will rise to woo the populace by rising to make good their electioneering promises. Though the CBN is expected to rise to curtail inflation, it is generally believed that most financial institutions will not suffer shortage of funds so much so long government expenditure is expected to improve.

Earnings of financial institutions up until Q3 2017 were positive with a number of the banks almost reporting in Q3, their Q4 earnings of the previous year. Earnings outlook for Q4 2017 to be released to the market anytime beginning March 2018 is positive.