The Nigerian equities market on Friday closed in green as the All Share Index grew further by 1.53% to close at 28,871.93 points against the previous close of 28,438.19 points on Thursday.

The market breadth closed positive as 15 stocks gained, while 14 stocks declined in their share prices. 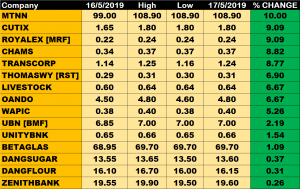 MTN Nigeria with 10% growth led other gainers to lose at N108.9 from the previous close of N99 on Thursday.

Cutix and Royal Exchange Assurance among other gainers also both grew their share prices by 9.09% to close at N1.8 and N0.24 respectively. 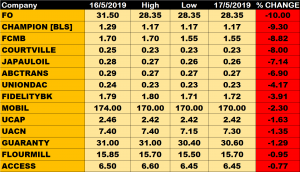 Forte Oil, Champions Breweries and FCMB among other price decliners shed their share prices by 10%, 9.30% and 8.82% respectively.