The Nigerian equities market on Thursday, first of August closed higher as the All Share Index survived the downward trend, closing the day’s trading by 0.11% higher to arrive at 27,748.46 points against the previous close of 27,718.26 points on Wednesday.

Aggregate volume of traded stocks for the day was 97 million units, valued at N1.7 billion in 2,936 deals.
Market Breadth
The market breadth closed negative as 12 stocks gained, while 16 stocks declined in their share prices.
Percentage Gainers 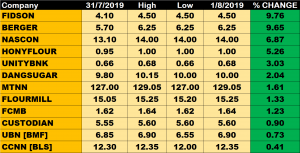 Fidson Healthcare with 9.76% growth led other gainers to lose at N4.50 from the previous close of N4.10 on Wednesday.
Berger Paints and NASCON among other gainers also grew their share prices by 9.65% and 6.87% respectively.
Percentage Losers 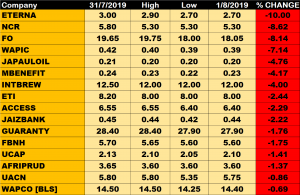 Eterna Oil, NCR and Forte Oil among other price decliners shed their share prices by 10%, 8.62% and 8.14% respectively.
Volume Drivers

Zenith Bank traded about 11 million units of its shares, in 252 deals, valued at about N212 million.