Opposition Governor Ayo Fayose of Ekiti state, a pathological critic of President Muhammadu Buhari, met face-to-face and in a warm handshake with the president at the villa on Thursday.

Fayose was at the Villa to attend the Council of State meeting.

President Buhari had summoned a meeting of the Council of State to deliberate on key national issues. 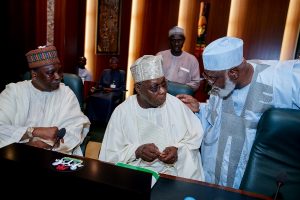 Obiano also revealed that the appointment of two non-legal practitioners in the Federal Judicial Service Commission was also endorsed by the Council.

He said “Council was consulted today and the Council deliberated and endorsed the President’s appointments of the following vacant positions; the two non-legal practitioners to the Federal Judicial Service Commission, a National Electoral Commissioner for INEC and 23 members of the National Population Commissionn’’

According to him, the names of the new appointees would soon be made available to the public.