Trading activities on the floor of the Nigerian Stock Exchange on Friday closed on a positive note as the All Share Index appreciated by 0.83% to settle at 24,829.02 points from the previous close of 24,625.24 points on Thursday.

Investors gained N106 billion as market capitalization appreciated by 0.83% to settle at N12.952 trillion from the previous close of N12.846 trillion.

The market breadth closed positive as 14 equities gained while 13 equities declined in their share prices. 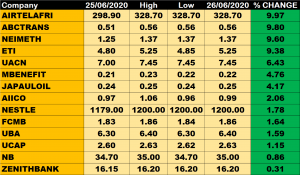 ABC Transport, Neimeth Pharmaceuticals and Ecobank among other gainers also grew their share prices by 9.80%, 9.60% and 9.38% respectively. 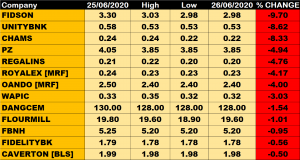 Fidson Healthcare led other price decliners as it shed 9.70% of its share price to close at N2.98 from the previous close of N3.30.