The Nigerian equities market on Thursday closed in green as the All Share Index grew marginally by 0.13%, closing at 26,824.50 points from the previous close of 26,790.10 points on Wednesday.

The market capitalisation closed at N12.947 trillion, gaining N17 billion from the previous close of N12.930 trillion on Wednesday.

The market breadth positive firm as 19 stocks gained while 13 stocks declined in their share prices. 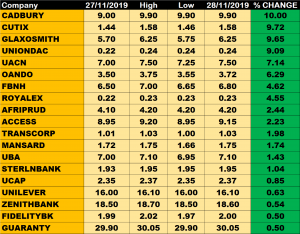 Cutix Plc, Glaxosmith and Union Diagnostics among other gainers also grew their share prices by 9.72%, 9.65% and 9.09% respectively. 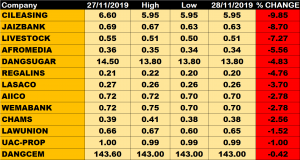