The Nigerian Stock Market on Thursday closed all green buoyed by gains in Axamansard Insurance, MTN Nigeria, the Dangote Sugar, Flour and others  as the All Share Index grew by 0.05% to close at 27,424.92 points from the previous close of 27,412.13 points on Wednesday.

Market capitalisation grew by 0.05% to close at N13.365 trillion against the previous close of N13.358 trillion, adding just N7 billion.

The market breadth closed negative as 9 stocks gained, while 23 stocks declined in price.

Axamansard Insurance Plc led other percentage gainers with 9.09% growth to close at N1.80 from the previous close of N1.65

Jaize Bank, MTN Nigeria, Dangote Sugar, Dangote Flour and not fewer than four other stocks made it to the gainers chart at the end of the day trading session. 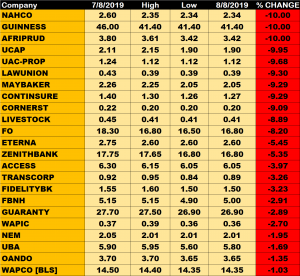 Nigerian Aviation Handling Company, Guinness Nig and Africa Prudential led the losers’ table, shedding 10.00% each of their share prices to close the day at N2.34, N40.41 and N3.42 below their previous close.

Zenith Bank traded about 39 million units of its shares in 515 deals, valued at about N664 million

Guaranty Trust Bank traded about 29 million units of its shares in 299 deals, valued at about N804 million